The Great Breeders.
The first Irish Wolfhound of the young Leslie and Ruth Jenkins, who were married in 1943, was Develin Molly, bred by Mrs L. Wager and whelped on Aug 20, 1950. This was not the first Wolfhound for Ruth, as when she was a child her family had as a pet, Droonagh, a bitch bought from Isaac Everett of the Felixstowe kennels. It was suggested by a neighbour who bred GSPs and Sealyhams that Molly was good enough to show and so began the long show career of the Eaglescrags, although Ruth had been to shows as a child with her mother who showed Sealyham Terriers.
During that period, she remembered the Wolfhounds as being very shy and reserved, and this was ons reason why she and Leslie were so keen on breeding good sound temperaments. Ruth also saw how stressful showing could be to the hounds and so the Eaglescrag hounds were never taken to show after show.

Tragically, however, all the pupies died from hardpad, a form of distemper. It was not until the following year that the vaccine against distemper was made generally avaiable. Although Molly did have another litter by Rory which survived, the puppies were very nervous and it was dicided by Ruth and Leslie that they needed to start again. Kilfenora of Ouborough was whelped in August 1949, bred by J.V. Rank by Ch Ouborough McCarthy of Boroughbury ex Ch Ouborough Tara of Boroughbury. On the death of Mr Rank the following year, she was transferred to the Ouborough kennel manager. Bill siggers, and in 1953 from Mr Siggers to J Jackson, from whom she went to Margaret Harrison and May Atfield of the Sanctuary kennel..

Kilfenora was given to the Jenkins in Whelp to Rory and from this litter came three bitches who were going to make their mark in three kennels - Song of Eaglescrag stayed in the home kennel and was their first CC winner, Sonnet went to the Sanctuary kennel and, mated to Sulhamstead Fellad, produced their first champion, Sanctuary, Brave, Knight, while Coral went to Ruth's sister, Noreen Twyman in Ireland, and became a champion and Irish champion and was the foundation of the Nendrum kennel. Song, mated to Ch Sulhamstead Sedlestan Rebel, produced in October 1959 a letter which  included

"One of the best":
Ch Eaglescrag Celeste
(US import Fitzarran Yankee of E ex E Jessica)

Buckhurst sailor of E, who became the sire of Ch Nano of Arraghglen, and Saraht of Eaglescrag, who was sold as a puppy but returned to her breeders at the age of 18 mounts. Sarah, mated to Ch Sulhamstead Max, produced Ch Clindhu of E (the first Eagelscrag champion), Swedish Ch Driella of E and Ch Sulhamstead Morna of E. In February 1962 Song produced a litter by Ch Sulhamstead Remus which included Mary and Moira of E. Mary went to America whre she becam the first Eaglescrag Champion in that country, and Moira stayed at home, became a champion (on the same day as Clindhu gained his title), and produced, by Ch E Clonroe of Nendrum (son of Song's litter sister Carol, by Max), Ch Red Wully of E. Wully was a great ambassodor for the breed, as he was a regular traveller on the London Underground and did a lot of advertising work, as well as going reserve best hound ar Crufts under Joe Braddon. The Eaglescrag hounds were noted for their wonderful temperaments and Clindhu and Wully both had this in full measure. Ruth has always felt very strongly that they were so lucky to be able to access the best breeding lines of the day from Ouborough and Sulhamstead, which had become well established before the 1939 - 45 was and had managed to keep going through that war, even though so much of the Ouborough kennel had been lost to hardpad towards the end of it. She also gave great credit to Rory, who she felt had done so much to improve the temperaments of Wolfshouds in the UK. In the early days Leslie and Ruth lived in Hertforshire, but Leslie was of Welch descent and took his degree in agriculture and zoology at Aberystwyth, and in the early ;70s they moved to Wales, to a farm in Dyfed.
They felt that the hounds needed space and so the farm was perfect in this repect. They had two sons, one who became a vet and the other an electronics engineer. Back to Ch/Ir Ch Carol of E in Noreen's Nendrum kennel. Mated to Max, she produced Clonroe, who was flown to the Jenkins from Belfast at the age of about 12 weeks. He gave them their first taste of the big ring by winning BOB at Cruft in 1966, and was the sire of serveral champions. Clonroe's litter sister, Ir Ch Corrie of nendrum, was mated to Brave Knight and produced the Jenkins, E Alice of Nedrum. Alice mated to Clindhu produced Ch Caio of E, and mated to Ted Wully she produced Ch Fintan of E, their first BIS winner - at Blackpool in 1973. Alice mated to Clonroe produced Ch Conchessa of E, and Conchessa to Sulhamstead Woodside Finn produced Ch Clodagh of E. Two Bitches came into the kennel from outside, from a Clindhu daughter, bred by Elsie James, Ch E. Cooleen of Boroughbury. She was mated to Wully and a bitch, Amber was retained from the litter. Amber mated to Caio produced Ch E Kelt. The other bitch was Thorwick Rossan of E, a daughter of Din Jo of Boroughbury (a son of Clonroe). Rossan mated to Caio produced Ch E. Toby, and Kelt and Toby mated together produced E Katy, who was exported to America where she became a Champion and produced, by Am Ch Wildisle Warlock, Fitzarran Yankee who was imported back to Eaglescrag. 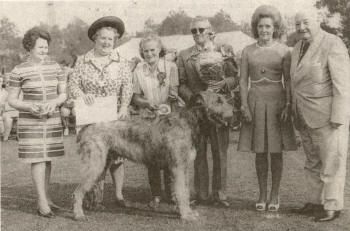 Clindhu was the sire of Petasmeade Chant, who went on to produce three UK champion in the top winning P Chieftain of Brabyns, and P Ophelia and Oberon. He was also the sire of Ch Outhwaite Clodagh of Boroughbury, who went on to produce Ch O Ulaidh. Caio won 14 CCs, the last from vetaran dog at the LKA '75, under Judy deCasembroot. He went on to win the group. Apart from Kelt and Toby, Caio sird Ch Mochras Banrion and Int Ch Boroughbury Justice and Jolly. Justice proved a great sire and a major influence on the breed in Ireland. Clodagh of E mated to E Kestrel, a son of Fintan and Rossan, produced Sp/Port Ch E. Liam. Befor being exported, Liam was mated to Kelt and from the litter came Jessica who, mated to Yankee, produced E. Craigie, the sire of Ch Marumac Charlock, and Ch E Celeste who went BIS at her first show, and Irish Wolfhound club open show. Celeste seemed to Ruth and Leslie to be alle they had hoped for, having a wonderfull nature as well being what Ruth considered one ot he best of the Eagelscrag hounds. Out ot the Liam/Clodagh mating also came E. Lysander, who wend to Dagmar Kenis's Solstrand kennel, and became a champion and a notable sire, his progeny including Ch Laird of Solstrand, Ch Kellybourne Ice Rocket. Ch/Ir Ch Bahbarella and Ch clonara Cassnu. Celeste was mated to Ch Solstrans Kaspar (Charlock ex Ice Rocket), which produced Ch E Iceflo. Celeste's litle sister, Cariad, was mated to Ch Marumca Cedric of Telgar (a son of Bahbarella) and from this litter came Ch E. Harvester. Caiad went on to produce a litter to Clonara Nizam (a son of Cassnu) from which came Chs E. Jake and Justin. Iceflo was mated to Ch Telgar Hadlee and produced Ch E. Kapitan, who won the group at South Wales in 1993 and 1994, also taking BISin 1994. Besides E. Kate (Yanke's dam), other Eaglescrag hounds have been exported and have been the foundation stock for now well known kennels such as the Fitzarran kennels of Mr and Mrs William Deemer in the US, the McEvoy's Tirowen kennel in Australia, the von der Oelmühle kennel of messrs Papenfuss and Rösner in Germany, and Mrs Jansen's kennel in Sweden. Eaglescrag hounds have on two occasions been winners of American specialties, and Morvagh of E won BIS at a World Show. Ruth first judged in the early, '60 and gave CCs for the first time af Blackpool in 1967. She also became a ch show jugde of Deerhounds. She has judged Wolfshounds several times in other countries, including twice officiating at the American specialty. She started on the committee of the Irish Wolfhoud Club in 1966, became chairman, then vice-president and then president, a positon she holds today. She was also one of the smalll group (the others were Alan and Molly Hyett and Audrwy Hegarty) which set up the Irish Wolfhound Rescue Trust in 1967. Sadly, Leslie died last year and Ruth has moved form Pennar Fach Farm. She now has just one hound as companion, but the Eaglescrag name lives on, having had such a marked effect on the in so many areas of the world. 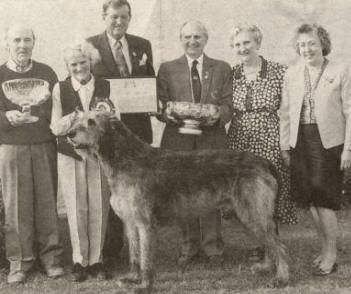 In the issue in which we feature dogs in Wales it is appropriate to illustrate a win at Wouth Wales Ch show by a dog owned and bred in Wales. Leslie and Ruth Jenkins are pictured with Ch Eaglescrag Kapitan (Ch Telgar Hadlee ex Ch E Iceflo) after his 1994 BIS triumph, with judge David Rocke from Australie, chariman Elwyn harding, president Tydfil Bebb and secretary Isobell Dyke. 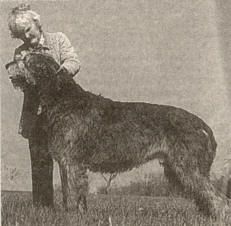 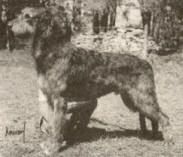 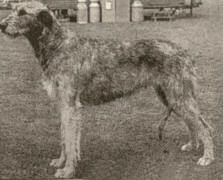 Song of Eaglescrag
(Ch Sanctuary Rory of Kihone ex Kilfenora of Ouborough'),from one of the earliest litters and behind all subsequent homebred winners 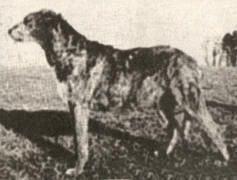 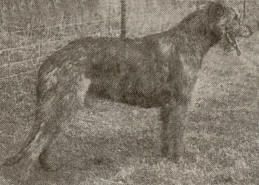 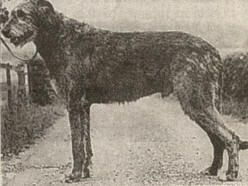 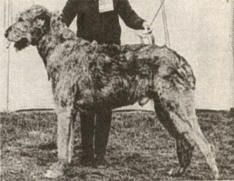 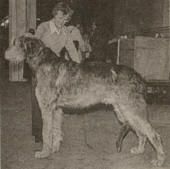 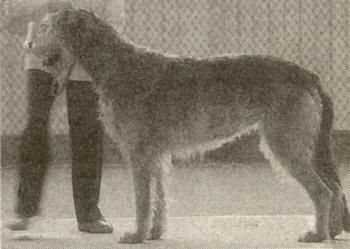 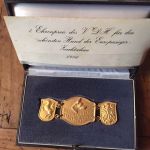 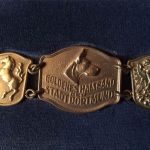 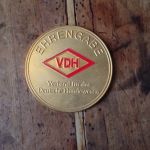 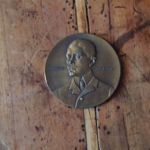 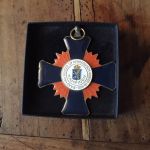 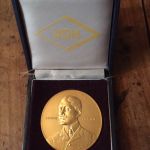